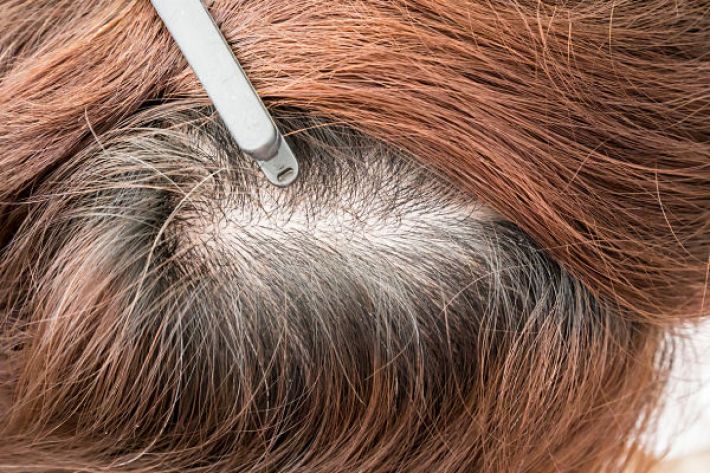 At this point they also continue to release hormones- mostly oestrogen and testosterone - and it is these hormones that play havoc with your body.

The most well-known symptoms of PCOS are irregular or ceased periods; weight gain; increased hair growth on the face and body and oily skin which can trigger acne.

Why does PCOS trigger hair loss?

Let’s talk about androgens first. To be clear the main ones are testosterone and androstenedione. Other androgens include dihydrotestosterone (DHT), dehydroepiandrosterone (DHEA) and DHEA sulfate (DHEA-S).

Commonly referred to as “male hormones” androgens are actually naturally produced within the ovaries, the adrenal glands and the fat cells of a women’s body. They play a key role in puberty by stimulating pubic and underarm hair growth; they control the degree and frequency of blood loss during menstruation and they become converted into oestrogen.

Androgen levels in women are much lower than in men so when the ovaries turn into cysts and then produce too much (known as hyperandrogenism) they can block the hair follicles thus causing what is called Androgenic alopecia or AGA. This means each affected hair becomes thinner in diameter, shorter in length and lighter in colour until it is finally not produced at all

This is also referred to as female-pattern hair loss or FPHL. Hair thinning/loss starts at the parting on the crown of your head and then gradually spreads so that it involves most of the top of the head so that the scalp shows through - especially in direct light. Eventually, this hair loss can become severe near-baldness, especially as women pass menopause.

The main culprit is actually DHT which binds to receptors in the scalp follicles and shrinks those follicles making it impossible for healthy hair to survive. This is exacerbated by the fact that lack of ovulation has caused lack of progesterone which would normally bind to those same receptors preventing hair loss from happening in the first place.

How common is Alopecia in women with PCOS?

Androgenic alopecia is not uncommon in women overall.  A reasonable estimate is 20% of women prior to menopause and up to 40% after that.

The key is the presence of one of more of the symptoms I described earlier - weight problems, irregular or no periods, increased hair on the body and face and acne

Unfortunately, there is very little research indicating how common the problem is:

One 2011 study found that 16% of 70 women presenting with PCOS-like symptoms had hair loss, whereas “all subjects had experienced menstrual problems, 81% were overweight, 86% had polycystic ovaries on ultrasound, 56% had hirsutism, 53% had acne, 23% had acanthosis nigricans, … and 38% had previously undiagnosed impaired glucose tolerance (IGT) or diabetes.

So it would currently seem that between 16% and 36% of women with PCOS do experience AGA but it is a less common symptom than menstrual disorders, hirsutism or acne.

Anti-androgens are occasionally suggested although there is little evidence that this helps the condition. Topical minoxidil or oral Finesteride may help. These are not prescribed on the NHS but can be bought as Regaine lotion and Propecia tablets over the counter. (Finesteride does have side effects so it is important to read about these before taking them)

These may seem to improve the situation somewhat but do not fully restore the hair. However, other avenues are being explored with an increased understanding of the detailed changes that occur when hair follicles are blocked. You might be interested to read about this further in this article which appeared in the Journal of Cosmetology and Trichology in 2015.

You may be interested in other blog posts on PCOS

I hope this has been helpful