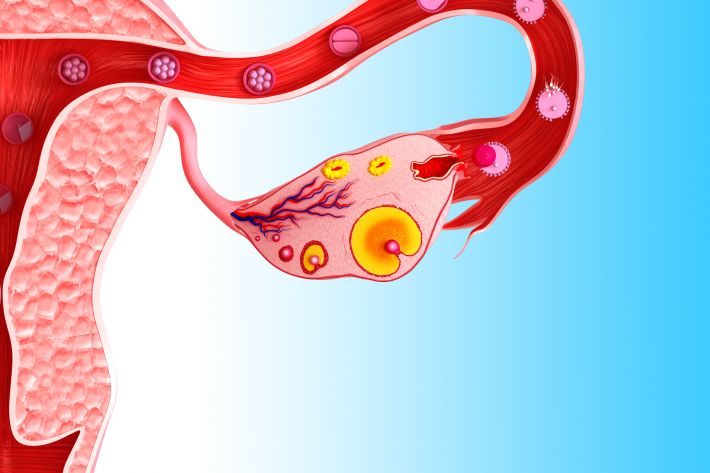 Most women will experience anovulatory cycles during their reproductive lives – this is typically caused by a change in hormones as they approach menopause. About 12% of younger women may also experience occasional anovulatory cycles which are preceded and followed by normal cycles and therefore are unlikely to affect fertility.

However, some women suffer from chronic anovulation and this is generally down to an endocrine condition the most common of which is Polycystic Ovary Syndrome (PCOS).

About 20% of women in the UK will have polycystic ovaries seen on a scan but less than half will have symptoms that are typically associated with PCOS. These include irregular, chaotic or absent periods, difficulty with weight management, increased facial or body hair growth, scalp hair loss in the male pattern or acne. They may have no symptoms and only find out that they have PCOS when they are tested having had difficulty conceiving.

The exact cause of PCOS is unknown but it is believed that a genetic cause is likely as family members frequently also have the condition and there is often a family history of type 2 diabetes.  An excess of androgens (male sex hormones such as testosterone) is commonly found in direct female relatives with 24% of mothers and 32% of sisters also experiencing PCOS.

Another widely accepted theory is insulin resistance. It is believed that in women with PCOS, it is insulin that stimulates the production of excess androgens and it is these that are responsible for the arrest of follicular development.

Although the condition can’t be cured it CAN be managed and it is possible to get treatment for anovulation if you are trying to conceive. Anovulation is the cause of infertility in about 33% of couples attending fertility clinics and 90% of these has PCOS.

An increased BMI lowers the chance of ovulation even with medical treatment (because androgen production is driven predominantly by insulin in overweight women) so the first course of action for women carrying excess weight is to change their lifestyle in order to embrace a healthy diet and good levels of exercise.

Losing 5-10% of total body weight can reduce central fat by up to 30% which significantly improves insulin sensitivity and helps to restore ovulation. Please see my previous post on a good PCOS diet.  UK guidelines are that women should preferably have a BMI of less than 30 before starting treatment.

Patients are then treated with a combination of:

I do hope this has been helpful.