The Pancreas and Diabetes 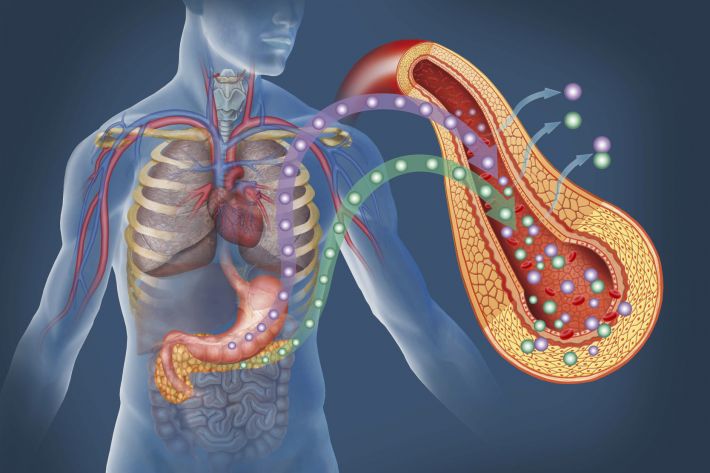 Sitting closely behind the stomach, the pancreas plays an important role in the process of digestion and is also responsible for keeping our blood sugars at a safe level.

The Pancreatic function is divided into

Because there are close anatomical and functional links between the exocrine and endocrine pancreas any disease affecting one of these parts will inevitably affect the other.

What’s more, diabetes can be the result of any disease that damages the pancreas  (including acute and chronic pancreatitis, cystic fibrosis and pancreatic cancer). It can also occur because of pancreatic surgery - although removal of 90% of the mass of the pancreas can usually be performed without resulting in diabetes.

When the pancreas is not working

This will manifest itself either through the onset of diabetes or by symptoms which indicate that the body’s digestion is not properly functioning. This is likely to result in

You may also be unable to fully absorb fat soluble vitamins like A, D, E, K and B12  - although being clinically diagnosed with vitamin deficiency is rare

It’s not unusual for glucose intolerance to occur in those with chronic pancreatitis but diabetes usually occurs later in the course of the disease and is more likely to be found in patients with a family history of diabetes. (Which suggests they already have a low reserve capacity for enzyme secretion or low insulin responsiveness)

Unfortunately its development greatly influences the prognosis and quality of life of those patients with exocrine pancreatic diseases. It can cause life-threatening complications such as hypoglycaemia or malfunction in both small and large blood vessels which may then impair the organs.

A distinct metabolic and clinical form of diabetes, this condition requires specialist knowledge. In the early stages diet and pancreatic enzyme replacement may be sufficient but, if this proves inadequate, insulin treatment with multiple injections is required.

It has been known for some time that Pancreatic Cancer and Type 2 diabetes are linked but we have still not discovered which has the biggest influence on the other. In other words we’re not sure which is the risk and which is the symptom.

Another is that pancreatic cancer leads to insulin resistance or loss of insulin producing capacity - either of which can lead to an increased risk in diabetes.

Pancreatic Cancer is most likely to occur in people aged 65 or over but it is a difficult cancer to diagnose as there may be only one symptom present. Overall symptoms may include:

However, the onset of diabetes in an otherwise healthy elderly patient is a potential warning sign of pancreatic cancer particularly if associated with weight loss.