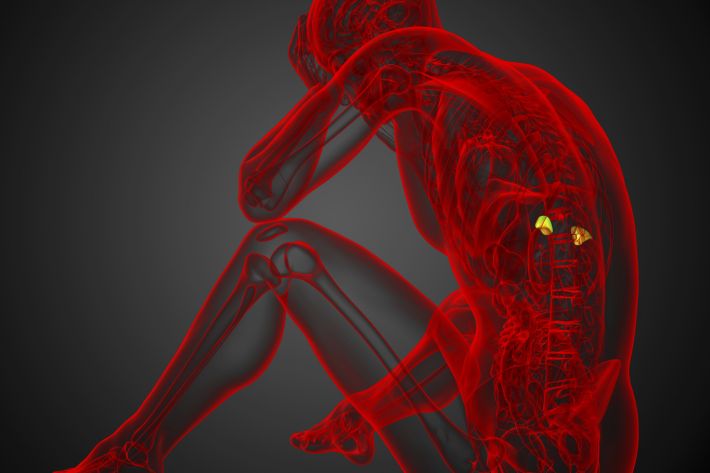 About the Adrenal Glands

Located at the top of each kidney, the adrenal glands are triangular shaped hormone producing glands which regulate several important functions of the human body.  They secrete the following important hormones:

There are two main adrenal gland disorders – Addison’s disease and Cushing’s syndrome unfortunately these can be fatal if left untreated. In this post I explain…

The steroid hormone cortisol which is secreted by the adrenal glands is vital for life – it not only regulates blood pressure it also regulates the body’s response to infections, stress, physical accidents and surgery.

Diagnosing falling cortisol levels, this condition was named after Dr Thomas Addison after he discovered its existence in 1855 due to TB infiltration of the adrenal gland.  Addison’s disease is rare with approximately 8,000 UK patients at any one time, whilst it can occur at any age most people are between 30 and 50 when it develops.

The most common cause of Addison’s disease is now autoimmune disorder in developed countries where it may be associated with thyroid disease, type 1 diabetes or pernicious anaemia. In the third world its most common cause remains tuberculosis. This is then called primary adrenal failure.

It can also occur as a side effect of a failing pituitary gland whereby there are low levels of ACTH - the hormone responsible for the production and release of cortisol from the adrenal glands.

Secondary adrenal failure can additionally occur as a consequence of high-dose long-term steroid treatment when normal adrenal gland function is suppressed for example:

Clinical signs and symptoms normally don’t appear until at least 90% of the adrenal cortex is destroyed and these can be so slow in onset that the condition is not likely to be diagnosed until an adrenal crisis is brought on by stress caused by illness, trauma or surgery.

The symptoms of those with insufficient cortisol leading up to a crisis are:

Because these non-specific symptoms (in which overwhelming fatigue is the common denominator) could relate to many conditions Addison’s disease is difficult to diagnose. One patient survey revealed that 60% had seen two or more clinicians before the disease is actually diagnosed weeks or even months after the first vague symptoms present themselves.

In primary adrenal failure, as the disease develops pigmentation changes may also be seen around:

Signs of an Adrenal Crisis

For those with Addison’s disease treatment is normally through the medication hydrocortisone which, taken in divided doses during the day, replaces the cortisol your body is not making. Usually fludrocortisone is added to treat the associated mineralocorticoid deficiency.

It is essential that patients carry a warning card or MedicAlert bracelet to warn medical staff that steroid treatment is required  in a medical emergency. They also need to be aware of “sick day” rules and know to increase their dose if they feel unwell for any reason – usually ill enough to take to their bed - or at the time of surgery.

For those in an adrenal crisis (which is the second most common cause of death in patients with known Addison’s disease and accounts for 15% of patients with this disease) urgent treatment with hydrocortisone injections and intravenous rehydration with fluids are essential. An emergency hydrocortisone injection kit can be prescribed by your GP which is important if you are going abroad.

Developed by the Addison’s Disease self-help group (www.addisons.org.uk) the following leaflets may be helpful to you

Diagnosing Addison’s: a guide for GP’s